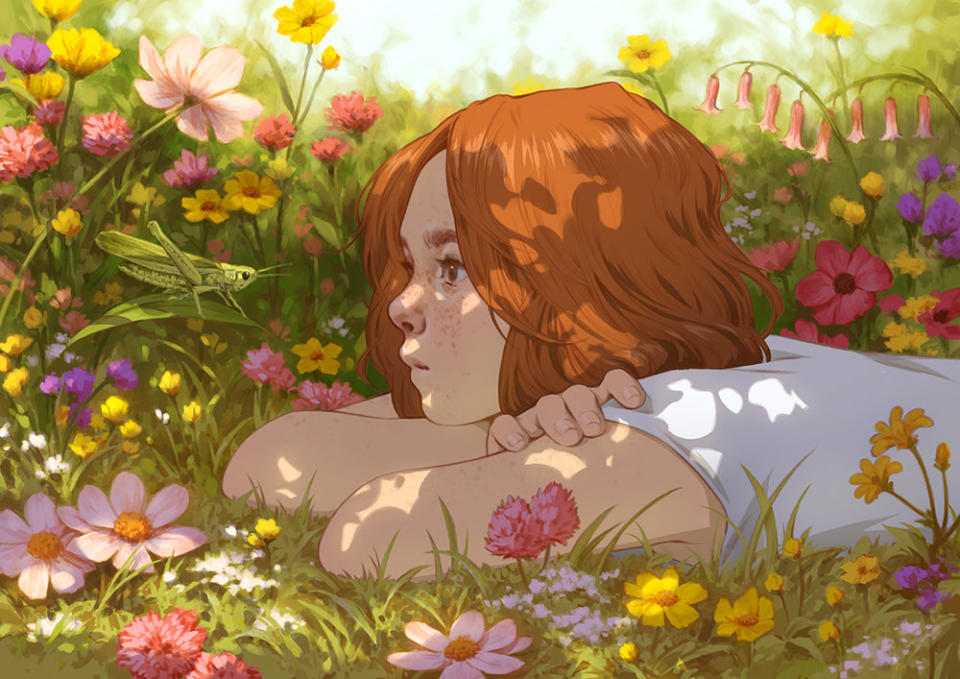 Djamila Knopf is a self-taught illustrator from Germany, Leipzig, supported by many followers on Patreon. Djamila sells her original artwork and limited edition prints on her online store as premium collector’s items.

She works with digital art, focusing on line art and cel shading.

“I’m on a mission to capture the imaginary scenes I’ve dreamt up since I was a kid, now that I have the necessary skills and resources to do so. If you want to be transported into a world where fantasy and reality blend into one another and that feels strange, yet familiar, you might enjoy my work.“

Djamila ‘s journey as an artist began from a young age watching animes (Japanese animation) and drawing inspiration from them. In 2009 she found out that artists can earn money from their work and decided to take this career path. She studied to be able to produce realistic art and be hired as a professional illustrator. Djamila posted her artwork on DeviantArt, gaining followers, and in 2012 she started doing art commissions.

In 2015-2016 Djamila worked in the gaming industry, as a freelance artist, but the stress was high and she found herself lacking the drive and energy to move forward. After contemplating what is her purpose as an artist, she found her original style and started drawing the art that she loves. Djamila’s unique style is influenced by the Ghibli Studio movies and the nostalgic days of childhood, surrounded by nature.

“I create illustrations that evoke a sense of wonder and nostalgia. That’s why, when you look at my work, you might catch a glimpse of the summers I spent strolling through the woods and fields around my grandparents’ garden, and you might also see my love for Japanese animation.”

Djamila gained succes with her art and now she is earning her income from Patreon supporters.

Djamila is a self-taught artist. She didn’t attend a traditional art college, instead learn on her own, from online and Youtube tutorials. Djamila graduated In 2017 with a master’s degree of “Master of Education”  that allows her to be a school teacher for art and English.

Nowdays Djamila Knopf is encouraging artists to follow their dreams and start a business doing the art that they love and believe in. She gives tips to beginner artist in this podcast and speed drawings on Youtube channel.

“When We All Fall Asleep” for the Creative Challenge hosted by Adobe! This has been a super fun collaboration. If you’d like to enter, check out the website billiexadobe.com for all the info, download the asset pack and get started! Make sure to post your entry on Instagram or Twitter and tag #BILLIExADOBE #contest and @adobestudents 💦 . . . . . . . . . #artistsoninstagram #artistsofinstagram #instaart #instaartist #fantasyart #drawing #painting #artwork #illustration #digitalart #digitalpainting

78 of Djamila’s illustrations were available as tarot cards, part of the Lumen Tarot project on Kickstarter and she has a new Kickstarter campain for her illustrated book Komorebi: The Art of Djamila Knopf.

Share this article with your friends if you liked it.