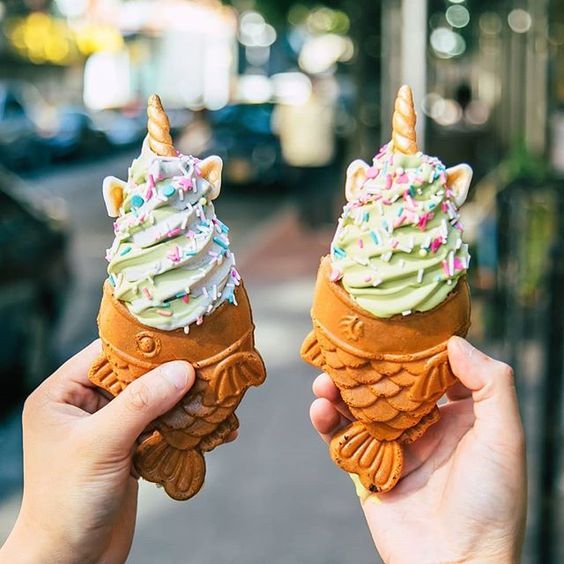 Taiyaki is a fish-shaped pastry that is popular in Japan during festivals. It is eaten warm and freshly baked from street food vendors, taiyaki shops and cafes. Tai-yaki means “baked sea bream”. Tai (sea bream) is known as the “the king of fish” in Japan and is considered a lucky symbol.

Taiyaki complemented by tea serving, photo by yokkohiyokko via Instagram

The taiyaki waffle looks like a fish, but the filling is traditionally made from sweet red beans paste called Azuka. Taiyaki evolved over time with new ideas like white taipioca taiyaki, taiayki croissant or tayiaki ice cream. Nowadays there are many types of fillings like chocolate, vanilla, cheese, custard, matcha and even ice-cream.

Every taiyaki shop has its own recipe for the batter and the cream. There are varieties of taiyaki according to season, in the spring, vendors sell a pink tayiaki that suggest the cherry tree blossoms, and in autumn, you can get taiyaki with chestnut filling.

Sakura pink Taiyaki in spring by jasminmin_ via Instagram

With its appealing shape, there is no surprise that taiyaki became trendy on Instagram. Taiyaki NYC is one of the most known taiyaki ice cream shops in US. With colorful pictures on Instagram, the store gained a lot of customers looking to eat some delicious ice cream and snap pictures of it. Taiyaky NYC understood the customer’s tastes and made their creations to be superyummy, with quality ingredients and vegan options, but also to have a visually appealing design. They accessorized the tayiaki ice cream with unicorn horns, mermaid tails, bunny ears. Even the colors of the ice cream and sprinkles look cool.

How to make a Fluffy Japanese soufflé pancakes look even yummier? Add a freshly baked azuka filled taiyaki, for an original dessert that is instagrammable.

Soufflé pancakes with azuki-cream taiyaki by Taiyaki NYC via Instagram

The Taiyaki NYC were so successful that they opened more locations, They have shops in New York in Chinatown, Williamsburg, Flushing, also in  Miami, Boston and in Downtown, Toronto, Canada.

Yet, tayiaki is not only in Japan, US and Canada. In Korea, Taiyaki is known as “bungeo-ppang” and has a history of its own. Thanks to its visual appealing shape and a pinch of luck, taiyaki managed to spread in all Asia, from Seul to Kuala Lumpur, and also in UK and Europe.

It’s said that taiyaki is a version of the “imagawayaki” pastry, that has a round shape. In 1909, Seijiro Kanbei from Naniwaya Souhonten shop in the Asabu-Juban district, Tokyo, started to sell his waffles under a fish shape. Before, he tried with turtle and rabbit shapes, but it was the sea bream fish shape that became popular.

It comes with no surprise that this shape was the most successful. In a fishing nation such as Japan, to bring home a sea bream fish is indeed very lucky. The sea bream (tai) is an expensive fish, especially the red tai, that is appreciated in Japan. From all the species of tai, the red tai fish (“madai” or “genuine tai”) is considered the most auspicious, as its name is pronounced similar to the word “medatai” that means celebration, happy, fortunate, prosperous. Red tai is served at New Year, weddings, birthdays, naming ceremonies. In spring, the red tai is called “sakura-dai” or cherry blossom sea bream.

The symbol of the tai fish is deeply embedded in Japanese tradition. Tai is given as an offering at the Shinto temples for the Kami (gods). From the 7 lucky gods, Ebisu, the god of commerce, fishermen and farming is portrayed holding a Tai (sea bream).

The red sea bream has a festival of its own Toyohama Tai Matsuri. In Aichi Prefecture, near a fishermen village, a parade of 5 giant papier mache sea bream floats make their way to the ocean, where they are lit up like giants lanterns. This festival is held with the purpose of attracting the benevolence of kami, to be safe on the sea and have a plentiful bounty.

Tayiaki inspired a hit song for children in 1976 “Swim! Taiyaki” that became a huge hit and took number one in top for 11 weeks, making this pastry a popular choice.

This iconic symbol made its way into the anime culture and was featured in anime series like “Freshly Baked Ja-pan”, “My Hero Academia”, “Princess Connect! Re: Dive” and in one of our favorite vintage animes, “Hime-Chan’s Ribbon”. Tayiaki has became part the Japanese pop culture with merchandise like toys, prints, t-shirts or enamel pins.

Anime fans and taiyaki nostalgics alike, bought themselves taiyaki cast iron pans (they can be found on Amazon) to bake their favorite fish-shaped dessert at home.

Taiyaki batter is made from wheat flour mixed with water and poured in a cast iron fish mold. The batter has a texture similar to a pancake or a waffle and can be mixed with milk, eggs and sugar. The filling is added between two layers and grilled to a crispy yellow brownish waffle. Taiyaki is best eaten hot as it gets mushy afterwards. Only the white tapioca taiyaki or rice flour taiyaki can be eaten as a cold dessert.

You can find tutorials on Youtube to make a taiyaki recipe yourself, or taste it a taiyaki shop.

Here is a tutoria by OCHIKERON on How to Make Taiyaki

For more taiyaki art look up taiyaki on Pinterest and #taiyaki on Instagram and see what you discover.

If you enjoyed this article about Taiyaki, share it or pin it.